Born on a farm in Voigstaedt, Weimar, Germany, Richard Lorenz became a painter and illustrator of dramatic western scenes, especially of the Plains Indian culture and the consequences of encounters with the white man's civilization. His most famous pupil was Frank Tenney Johnson. He was also well known for panoramic* painting and for depictions of horses, genre and landscapes.  As a young person in Germany, Lorenz determined to become a Biblical painter because he was fascinated by the subject of wandering, nomadic people in wilderness areas. He grew up in a village twenty-eight miles north of Weimar, and at age 15, began art study in Weimar including at the Royal Academy of Arts, where his work was recognized with several distinguished prizes. One of those prizes was endowed by composer Franz Liszt, and another was the Karl Alexander Prize, which he won twice. It was the school's highest award. One of his most influential teachers was Heinrich Albert Brendel (1827-1895), famous European painter of animals, especially horses. Other teachers were landscapist Theodor Hagen (1842-1919) and portraitist Max Thedy (1858-1924).

In May 1886, Lorenz arrived in Milwaukee, Wisconsin where he established his career and lived for most of the remainder of his life. He has been described by an art historian of that city as "the most gifted German immigrant artist to settle in Milwaukee." (Merrill 66). Lorenz initially emigrated to Milwaukee at the request of William Wehner who had formed the American Panorama Company* and then recruited German painters noted for their skills with religious and historical subjects. The resulting panoramas were huge lengthy canvases, some of them 25 X 350 feet. Lorenz worked on The Battle of Atlanta, which became the company's most famous work.  Lorenz specialized in horses, depicting them in every kind of activity and perspective.

From 1887 to 1890, he travelled and sketched in the West including Oregon, Arizona, Colorado, Texas, and California. In 1887, he worked with August Lohr to install a panorama in San Francisco. While there he sketched scenes of Chinatown and Monterey. On this extensive trip, he went to the Crow Reservation, and from this experience, did his first Indian subjects inspired by stories he heard of the Sioux Massacre at Little Big Horn.

He also exhibited outside of Milwaukee including Munich in 1891, Paris Salon* in 1901, Chicago World's Fair in 1893*, the St. Louis Exposition of 1904*, and regularly at the Art Institute of Chicago* and in exhibitions sponsored by the Western Society of Artists*.  On August 3, 1915, Lorenz died in Milwaukee from a stroke suffered while walking near his home. His health had been declining and he suffered near blindness from cataracts. He is buried in Evergreen Cemetery in Milwaukee.

During his lifetime, he was often compared to western painter Frederic Remington because he was an important recorder of western subjects for future generations. Although the reputation of Lorenz has not been as great as that of Remington, he made significant contributions through his own canvases and joint-project panoramas in enlightening Easterners of scenes of the American West.

Source:
Peter Merrill, German-American Artists in Early Milwaukee
Peggy and Harold Samuels, An Illustrated Encyclopedia of Artists of the American West
Peter Hastings Falk, Editor, Who Was Who in American Art 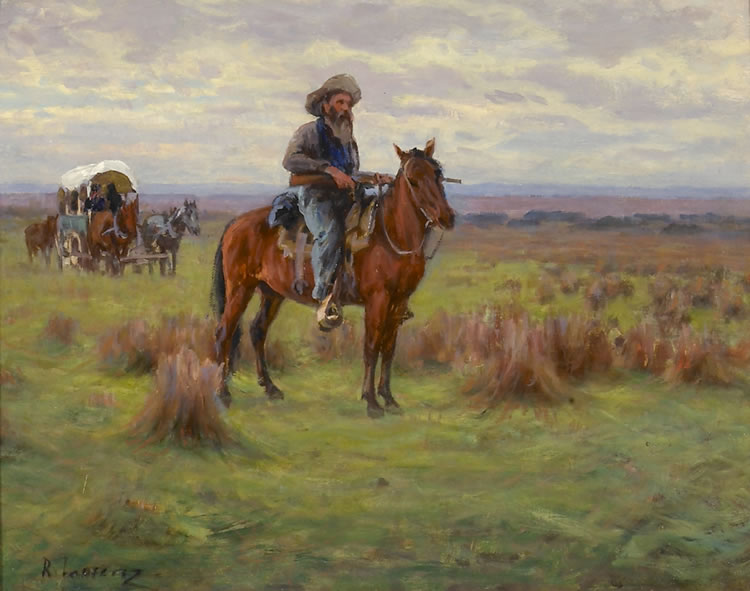