Harry Jackson was a widely known artist recognized mostly for his realistic paintings and sculptures of Western American subject matter. Jackson, who took his mother’s maiden name after his parents divorced, was born in Chicago on April 18, 1924, to Ellen Jackson and Harry Shapiro. Life was difficult for young Harry as his father was in and out of jail and Harry often dodged school and roamed Chicago’s dangerous streets. At age eight, Harry’s teacher recognized artistic talent in the boy and secured him a scholarship to the Chicago Art Institute’s Saturday classes for children.

While ducking school and a bad home life, Harry spent time around cowboys at the Chicago stockyards. About this time, he also developed an interest in the works of Frederick Remington and became infatuated with Wyoming’s Pitchfork Ranch. He learned about the latter from Charles Belden’s photographic essay, which appeared in a 1937 issue of Life magazine. In 1938, at age 14, Harry hitchhiked to Park County, Wyoming, to work as a paid ranch hand and cowboy. In the summer and fall of 1938, he worked for Earl Martin, who managed the Bradford Ranch on the North Fork. In 1939 he worked with Cal Todd and others on the Two Dot and Pitchfork ranches. When he wasn’t performing ranch work, he produced sketches akin to those of Remington. Even after he moved to Wyoming, young Harry would return to Chicago during winter to continue his studies at the Art Institute.

At age 18 Jackson enlisted in the Marine Corps and was assigned as a sketch artist to the Fifth Amphibious Corps. He was seriously wounded during the war and was awarded the Purple Heart. After being shipped to Los Angeles, he became an official Marine Corps combat artist. In these works, Jackson depicted bloody close-combat scenes. However, after viewing Jackson Pollock’s painting, The Moon Woman Cuts the Circle, Jackson underwent an artistic conversion, moved to New York, became a close friend of Pollock, and adopted the Abstract Expressionism style. His reputation as an artist grew.

​Following a trip to Italy during the 1950s, Jackson re-embraced realism and his career went full circle. Once again he was painting scenes from the West, the subject matter that had interested him as a boy. He also became friends with the actor John Wayne and created a sculpture called The Marshal, which portrayed Wayne as the character “Rooster Cogburn” in the movie True Grit. In 1958 Jackson received a commission to produce two heroic-size paintings for the Whitney Gallery of Western Art in Cody, Wyoming. These were The Stampede and The Range Burial, which Jackson also made into bronzes and lithographs. Jackson also created the large sculpture Sacagawea, which stands outside the Buffalo Bill Historical Center in Cody. 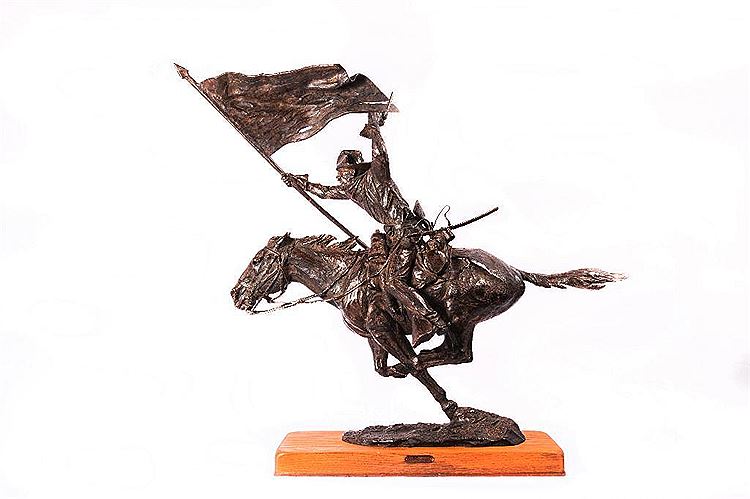